Using parables, Jesus went on to say, “A man planted a vineyard, put a fence around it, dug a hole for the wine press and built a watch tower. Then he leased the vineyard to tenants and went abroad. In due time, he sent a servant to receive from the tenants his share of the fruit. But they seized the servant, struck him and sent him back empty-handed.”

“Again the man sent another servant. They also struck him on the head and treated him shamefully. He sent another and they killed him. In the same way they treated many others : some they beat up and others they killed. One was still left, his beloved son. And so, last of all, he sent him to the tenants, for he said, ‘They will respect my son.'”

And Jesus added, “Have you not read this text of the Scriptures : ‘The stone which the builders rejected has become the keystone; this is the Lord’s doing, and we marvel at it?'”

They wanted to arrest Him, for they realised that Jesus meant this parable for them, but they were afraid of the crowd; so they left Him and went away.

Alleluia! Blessed is the one who fears the Lord, who greatly delights in His commands. His children will be powerful on earth; the upright’s offspring will be blessed.

Wealth and riches are for his family, there his integrity will remain. He is for the righteous a light in darkness, he is kind, merciful, and upright.

It will be well with him who lends freely, who leads a life of justice and honesty. For the righteous will never be moved; he will be remembered and loved forever.

I, Tobit, have walked in the ways of truth and justice all the days of my life; I have given many alms to my brethren and to those of my countrymen who were deported with me to Nineveh, a city in the country of the Assyrians.

When I returned to my house, my wife Anna and my son Tobias were given back to me. At the feast of Pentecost, the sacred feast of the Seven Weeks, they prepared a good meal for me and I sat down to eat. I saw the many dishes and said to my son : “Go and bring as many as you can find of our relatives who are in need and who remember the Lord. I will wait here for them.”

When Tobias returned, he said : “Father, one of ours has been strangled and thrown into the public square.” Before I ate anything I hurried out and carried this man into the house and waited till sunset to bury him.

After sunset I went out and, after I had dug a trench, I buried the man. My neighbours mocked me, saying : “He no longer fears to be put to death for doing that; he had to flee but look he is again burying the dead.” 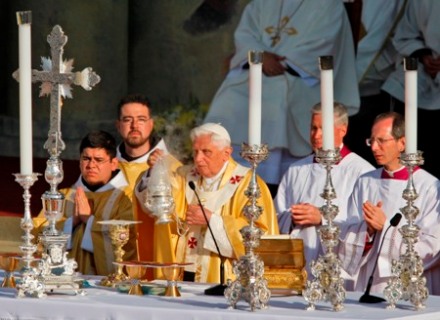 Priests and the laity have their own roles within the Church, and each have been given their missions for the glorification of God.

Priests must not be just men of service, as indeed service should be done by everyone, especially the laity! There are only so many priests, and so many more laypeople in the Church. There are in fact about 3,000 laypeople for each priest in the Church (There are only slightly more than 400,000 priests, diocesan and religious, as compared to almost 1.25 billion people i the total Catholic population)

As much as priests can do plenty of service, caring for the sick, etc, the laity cannot just depend on the priests to do all the work while they go on about their own business.

No, the primary function and duty of a priest, henceforth, is to lead the people in the worship of God, like the priests of Israel of old. This is a duty and a vocation that only them can do, and the laity cannot do. Reaching out to the poor must remain part of the mission of a priest, but it cannot be his main one, for it is the laity who must play their part to help the poor and the unloved ones.

Priests are not employed and many, if not most, are not rich, while many Catholic laypeople are in fact quite well-to-do, even having excessive wealth, that only if all of them would give a small portion of their wealth, the world can be so much better.

The key is not to strip the Church and all that has been in place, solely for the glorification of God, in the disguise of helping the poor and the unfortunate. The key is to encourage greater participation by the laity in the works of service and charity. Priests give example through their own service, but they cannot be expected to do all the work.

In fact, the laity should do at least 90% of the work, as priests are primarily, priests, and should be more focused on the worship aspect, which only they can do, and not the laity.

That is why, we need more holy and intellectual priests, not just priests who know how to serve others, but those who have good understanding of the faith and the liturgy of praise and worship to God in the Mass. Everyone can serve others, if they are called, including all the laypeople. But, if the priests themselves cannot be depended on in the matter of worship and the faith, who then should the laypeople turn to?