As of last Sunday, 7 July 2014, my blog has reached its 100,000th view by visitors from different parts of the world. I thank all those who had spent their time to come and read what I had published in this blog.

May God be with us all, bless us and guide us always. And may He guide me and bless me so that I can continue to write, to publish and to work for His greater glory. 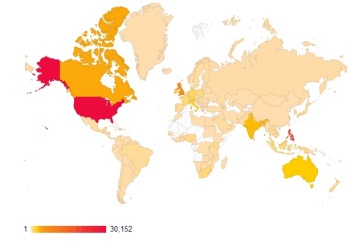 3 of the new Cardinals are non-electors, being above the age of 80, appointed purely as honorary Cardinals for their service to the Church, and the other 16 Cardinals are voting-age Cardinals (below 80), and will be eligible to vote for the next Pope in the next Conclave until they reach the age of 80.

The College of Cardinals now stands at 218 members, with 122 Cardinal-electors and 96 Cardinal non-electors as of 22 February 2014.

2. Lorenzo Cardinal Baldisseri, Secretary of the Synod of Bishops and College of Cardinals

3. Gerhard Ludwig Cardinal Muller, Prefect of the Congregation for the Doctrine of the Faith

4. Beniamino Cardinal Stella, Prefect of the Congregation for Clergy

Thanks be to God who has granted me the strength daily to persevere in my faith and my dedication to Him, which I offer to Him and all my fellow men through the works of my hands.

Here is the current statistics of my blog :

During the Seventh General Congregation of the College of Cardinals this Friday morning, 8 March 2013, the College of Cardinals had accepted the letters of the two Cardinals who are unable to attend the Conclave due to health issue (Cardinal Darmaatmadja of Jakarta) and other reasons (Cardinal O’Brien of Scotland, UK), according to the provisions of the Apostolic Constitution Universi Dominici Gregis and the modifications in the Motu Proprio Normas Nonnullas.

The morning meeting had also discussed the modifications made on the Article 37 of the Apostolic Constitution Universi Dominici Gregis, which deals on the earliest starting date of the Conclave, which originally must be at least 15 days from the Vacancy of the Apostolic See, but then because the modifications made by the Motu Proprio Normas Nonnullas, which provided for a waiver of the 15 days waiting period, allow for an earlier start providing all the Cardinal-electors are already in Rome.

As all the Cardinal-electors are already in Rome, they can immediately decide on when to begin the Conclave, which is scheduled to be done and voted in the Eighth General Congregation on Friday afternoon. Fr. Federico Lombardi confirmed that the Conclave will not begin either tomorrow (Saturday) or Sunday. The Conclave is likely to begin either Monday, Tuesday, or Wednesday (11-13 March 2013)

There will be only one General Congregation session on Saturday morning, that is the Ninth General Congregation of the College of Cardinals. The Cardinals too may go and visit (may not be all of them) their titular Churches in Rome (I will publish the list of the titular Churches for each Cardinals, and if possible, the addresses of each in Rome, in case anyone looking to meet any of the Cardinals in Rome for the Sunday Mass) for Sunday Mass to pray for the election of the new Pope and for the Conclave. Each of the Cardinals are given a titular church in Rome upon his appointment as a Cardinal of the Holy Roman Church.

Cardinal Prosper Grech from Malta, who is a Cardinal non-elector, will be the one giving out the second of the two meditations as mandated by the Apostolic Constitution Universi Dominici Gregis, to be given out prior to the beginning of the Conclave.

18 Cardinals spoke in the morning meeting and several inteventions had also been made, on several issues from rules of the Conclave to other matters. Issues covered are bioethics, interreligious dialogue, collegiality, role of the Church in the world, in justice, and others.

A video is shown to the reporters during the press briefing by Fr. Federico Lombardi, head of the Holy See Press Office, on Friday afternoon, on the place where the Cardinal-electors will reside during the duration of the Conclave (currently the Cardinals are staying in different locations in Rome, but will move in to the place after the Conclave begins), which is called Domus Sancta Marthae, commissioned by the late Blessed Pope John Paul II, and was also used in the 2005 Conclave. Shown was the spartan but comfortable lodgings of the Cardinal-electors. The Cardinals will be assigned the rooms randomly.

Add : 220,000 people had ‘adopted’ a Cardinal through the Adopt a Cardinal website, and pray for them during this period.

Nevertheless, we pray for both Cardinal O’ Brien and Cardinal Darmaatmadja that God will always be with them, and of course we pray for all the rest of the Cardinal-electors who will go into the Conclave to elect the new Pope! May the Holy Spirit be with them and guide them through until we hear “Habemus Papam! We have a Pope!”

The resignation of Cardinal Keith O’ Brien, now Metropolitan Archbishop Emeritus of St. Andrews and Edinburgh in Scotland, UK, has been accepted by Pope Benedict XVI, and allegations of improper conduct have also arisen against him. As such, he found it wise not to participate in the Conclave, which will happen sometime in March 2013.

Therefore, at this moment, we will have 115 Cardinal-electors barring any other Cardinals who may also skip the Conclave due to poor health such as Cardinal-Patriarch Antonios Naguib of the Coptic Catholics who is reported to be in ill health.

With regards to Cardinal O’ Brien, it is easy for many within, and especially from outside the Church of Christ to accuse not only him, but the whole Church itself. Many would be very happy to see the Church destroyed, and therefore, crushing the last bastion of truth and light in our struggle against evil. The world does hate Christ and those who believed in Him. We in the Church, and our leaders are human, and we are all sinners. Indeed, to those who have been given the trust and authority, much responsibility is given too.

Whatever bad things Cardinal O’ Brien had done, much good he had also done as well, in the service of our Lord. We thank him for his long service to God and His Church and pray that he will cooperate in all matters necessary, so that our Church, indeed, will be purged from all evil that has encroached into it in recent years. Indeed, Satan has been so busy working against God and His people that not only that he is not satisfied with just turning the world against us, it also corrupts even those inside, to destroy us.

This is why, the Year of Faith is important, because we must remember first and foremost that no matter what Satan throws at us, our faith must ever be impeccable and strong, and we must always centre ourselves in the love of God, through the Church. So, brothers and sisters in Christ, let us pray that the Lord will send His Holy Spirit to cleanse, not only our Church, but also the whole world, from Satan the deceiver. Pray for our Pope Benedict XVI who will be retiring soon, and for his soon-to-be elected successor. God bless the One, Holy, Catholic, and Apostolic Church!