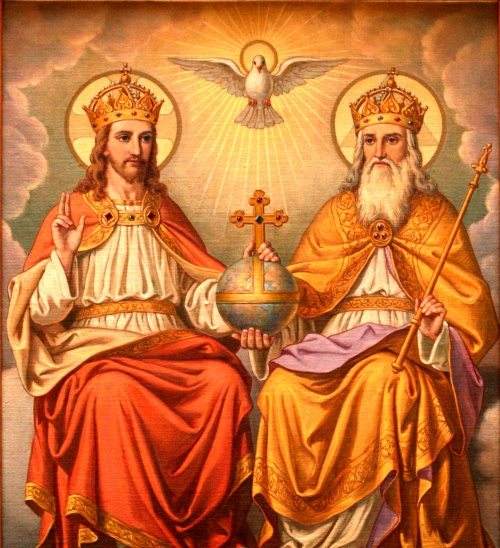 ﻿Liturgical Colour : Green﻿
Dear brothers and sisters in Christ, on this Sunday we all heard a simple and yet clear and very important message from the Holy Scriptures, which each and every one of us ought to take note of as we live our lives in this world so that we do not end up walking down the wrong path and doing the wrong things. That is because today’s readings are truly about the choices we make in life.

In the first reading today taken from the Book of the prophet Amos, we heard God chastising His people through His prophet Amos, about their wickedness and unjust actions, all borne out of greed and selfishness, desiring to have more for themselves while doing that cause disadvantage, pain and even suffering for others who have less from them or even none. They were dishonest, wicked and selfish.

They cheated people from their money, even the poor and those who have little. They adjusted the size of their scales and measurements to gain more profits for themselves, so that they sold at the same or higher price a commodity that they sold at a smaller piece or weight because they rigged the measurement. They have also unlawfully and unjustly charged and made life difficult for many people, all to serve their own purposes and wishes.

This is linked to what we heard in the Gospel today, when Jesus told His disciples the parable of the untrustworthy and dishonest steward, who used his power to serve his own purposes and wants. The steward was found out in his dishonest actions, and the master was not pleased and fired him. Yet, when the steward found out that he has been dismissed from service, instead of being remorseful and regretting what he has done, he did it all the more.

Yes, we may sometimes misunderstand the meaning of today’s Gospel and the parable if we think in human terms. Many of us may even find the actions of the steward to be right and just, considering that he might be only trying to preserve himself and secure for himself something after he has been fired from his work and left jobless. And his reasoning was just that he was too embarrassed to beg, and that he has no strength to do menial and tough jobs.

That is exactly the human way of thinking, as what Jesus Himself made clear at the end of His parable, that one cannot serve both God and money at the same time. The reference to money is the reference to the worldly ways, how we used to live in this world, the expectations and all the things which this world had taught us to do, which often come in conflict and contrast with the ways that God had taught us to do.

As Jesus Himself said in another occasion, what use is that when a man gain everything he wished for and wanted for in the world, and yet lose his soul to damnation? That is what mankind’s shortcoming is, seeking to build up for themselves guarantee and assurance in this world and yet they do not take into account the world that is to come.

Then we come to the moment when we should also ask ourselves. As Christians, have we been building for ourselves the treasures of this world and yet forgetting the true goal of our lives? More importantly, have we done in accordance to what the Lord had told us to do, and which the Church of God had taught us? Or have we instead followed our own selfish desires and greed, as those wicked people in Israel in the past had done?

As Christians, our actions, words and deeds should be in accordance to what the Lord had shown us, the way that He has laid before us. Otherwise, if Christians do not live in accordance to what God had shown us, then it is a scandal not only for ourselves, for God’s people in the Church, but also to the Lord Himself. At the end of the day, we have to realise that we have grave responsibilities to bear, and the choice lies at our hands.

Indeed, we have a choice, and we should indeed make the choice and take a stand. Do we choose to stand with the Lord and obey Him, His laws and walk in accordance with His ways? Or do we rather stand with this world, ignoring the Lord and following the whims of our own desires? We have that choice given to us, as the free will granted to us by the Lord. It is therefore up to us, to choose whether we want to follow the footsteps of that dishonest servant, or whether we seek to be a better person than that.

Brothers and sisters in Christ, we are all called to live up to our faith by devoting ourselves wholeheartedly to the Lord and His ways. We cannot serve both the Lord and our worldly desires and wishes. One have to go for the other to be served, or else we are only shortchanging ourselves and others who are around us. Are we courageous enough to make that stand? Are we willing to make a difference in our own lives?

Let us all spend some time to think about this. Let us all discern and pray to the Lord, asking Him to guide us and to show us the way forward. Let us ask for courage and strength to stand up to the temptations of the world, and for us to be able to control and tame our human greed and desires, and grow less troubled by the troubles and the persecutions that will come our way by choosing to stand up with the Lord our God.

May God be our guide, and may His love and His grace be ever present in us all, that each and every one of us may become true children of our God, and all who see us may know that we truly belong to Him, as we live as how He had taught us and shown us, and we may always remain henceforth in His favour. God bless us all, now and forevermore. Amen.