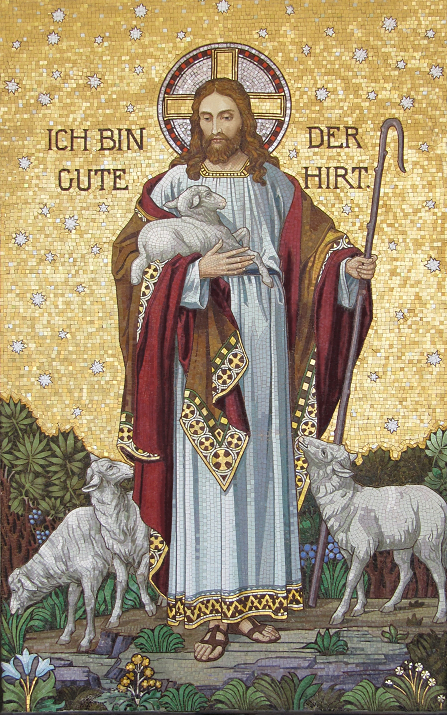 At that time, Jesus went out into the hills to pray, spending the whole night in prayer with God. When day came, He called His disciples to Him, and chose Twelve of them, whom He called ‘Apostles’ : Simon, whom He named Peter, and his brother Andrew; James and John; Philip and Bartholomew; Matthew and Thomas; James son of Alpheus and Simon called the Zealot; Judas son of James, and Judas Iscariot, who would be the traitor.

Coming down the hill with them, Jesus stood in an open plain. Many of His disciples were there, and a large crowd of people, who had come from all parts of Judea and Jerusalem, and from the coastal cities of Tyre and Sidon. They gathered to hear Him and to be healed of their diseases. And the people troubled by unclean spirits were cured.

The entire crowd tried to touch Him, because of the power that went out from Him and healed them all.

Compassionate and gracious is YHVH, slow to anger and abounding in love. YHVH is good to everyone; His mercy embraces all His creation.

All Your works will give You thanks; all Your saints, o YHVH, will praise You. They will tell of the glory of Your kingdom; and speak of Your power.

If you have accepted Christ Jesus as Lord, let Him be your doctrine. Be rooted and built up in Him; let faith be your principle, as you were taught, and your thanksgiving, overflowing.

See that no one deceives you with philosophy or any hollow discourse; these are merely human doctrines, not inspired by Christ, but by the wisdom of this world. For in Him, dwells the fullness of God, in bodily form. He is the Head of all cosmic power and authority, and, in Him, you have everything.

In Christ Jesus, you were given a circumcision, but not by human hands, which removed completely from you the carnal body : I refer to baptism. On receiving it, you were buried with Christ; and you also rose with Him, for having believed in the power of God, Who raised Him from the dead.

You were dead. You were in sin and uncircumcised at the same time. But God gave you life with Christ. He forgave all our sins. He cancelled the record of our debts, those regulations which accused us. He did away with all that, and nailed it to the cross. Victorious through the cross, He stripped the rulers and authorities of their power, humbled them before the eyes of the whole world, and dragged them behind Him, as prisoners.

Dear brothers and sisters in Christ, today as we listened to the words of the Scripture, we are all reminded to follow the Lord and be faithful to Him, and to play our part as members of God’s Church. God has told us to follow Him sincerely and wants us to understand His path and His commandments well. The Lord has shown us what we have to do, and what we should be doing is to trust in Him and to commit ourselves to this path that the Lord has revealed to us.

However, this is easier said than done, as many of us often preferred to trust in our own judgments and strength, and in our own way of thinking and ideas, not willing to listen to the Lord and trust ourselves in His infinite wisdom. As we heard in our Gospel passage today, the Lord Himself was confronted by the Pharisees who wanted to test Him and see if He would violate the law of the Sabbath that they held to be sacrosanct. They were often opposed to Him and His teachings, and particularly found offence in the Lord’s activities on the Sabbath.

This was where the Lord strongly rebuked those self-righteous Pharisees and teachers of the Law, by revealing how it is ridiculous for the Law of God to be used to prevent someone from performing something that is good, right and just, and He told them that the Law was not meant to arbitrarily restrict the faithful from doing anything on the holy day of the Lord. Instead, the true purpose and intention of the Law of the Sabbath was to remind the people of God to spend more time in their relationship with God.

And that was why, they were told not to do work or conduct their usual daily business, not because they could not do so or prohibited like as if those things were grave sins. Rather, out of the seven days of the week, if everyone were to do their work on every single day, then there would be no space for God in their hearts and minds. Hence, the Lord instituted the Sabbath and its laws to help the faithful to redirect their attentions and their focus on the Lord, away from the usual busy schedules and activities of their worldly lives.

Yet, this does not mean that the Lord wanted to exclude all of them from doing what they should and could be doing on that day, in doing good things and in showing their faith in the Lord. On the contrary, if one were to purposely ignore the plight of others and the needy during the day of the Sabbath, then they would have committed the sin of omission, in failing to do what they could do, when they were in the right place and opportunity to do so, to show God’s love and compassion to our fellow men.

Yes, brothers and sisters in Christ, this was what the Lord highlighted in His rebuke of the attitude of the Pharisees and the teachers of the Law. He wanted them to know that obeying the Law is and should not just be a mere formality and a ritual to be done with and to be followed blindly without understanding. Otherwise, it might end up like the Pharisees themselves, who practiced their version and interpretation of the Law, including the rules regarding the Sabbath, and yet, did so with little understanding of its true intentions.

God chose to heal the man without hesitation, and healed the paralytic man, restoring him to full health, to the anger of the Pharisees and the teachers of the Law who became even more determined to oppose Him and to arrest Him. Yet, through these actions, the Lord wants each and every one of us to know that His love is always all-encompassing, and He is always ready to reach out to us, and loving us once again, in His willingness to love us and in the great patience which He has shown us.

How about us, brothers and sisters in Christ? As we listened to these words of the Scriptures, we have all been invited to reflect on our way of life, on whether we have truly been faithful to the Lord in all of our lives and whether we have truly understood His Law and commandments, or whether we have been spending all these time merely paying Him lip service and treating our Christian life as a mere formality? Have we been living our lives as Christians in the wrong way all these while?

Let us all therefore spend some time to discern carefully what we are going to do from now on, in walking down the path that the Lord has shown us. Let us commit ourselves to Him anew and be ever more genuine and sincere in loving Him, and in loving one another according to His teachings. May God be with us all, and may He continue to guide us all through life, to be ever more faithful Christians, now and always. Amen.

At that time, on another Sabbath, Jesus entered the synagogue and began teaching. There was a man with a paralysed right hand, and the teachers of the Law and the Pharisees watched Him : Would Jesus heal the man on the Sabbath? If He did, they could accuse Him.

But Jesus knew their thoughts, and said to the man, “Get up, and stand in the middle.” Then He spoke to them, “I want to ask you : what is allowed by the Law on the Sabbath? To do good or to do harm, to save life or to destroy it?” And Jesus looked around at them all.

Then He said to the man, “Stretch out your hand.” He stretched it out, and his hand was restored, becoming as healthy as the other. But they were furious, and began to discuss with one another how they could deal with Jesus.

Find rest in God alone, o my soul; from Him, comes my hope. He alone, is my Rock and my Salvation; with Him as my Stronghold, I shall not be overcome.

Trust in Him at all times, my people; pour out your hearts before Him; God is our refuge.

At present, I rejoice when I suffer for you; I complete, in my own flesh, what is lacking in the sufferings of Christ, for the sake of His body, which is the Church. For I am serving the Church since God entrusted to me the ministry to make the word of God fully known.

I mean that mysterious plan that, for centuries and generations, remained secret, and which God has now revealed to His holy ones. God willed to make known to them the riches, and even the glory, that His mysterious plan reserved for the pagan nations : Christ is in you, the hope for glory.

This Christ, we preach. We warn, and teach everyone true wisdom, aiming to make everyone perfect, in Christ. For this cause I labour and struggle, with the energy of Christ working powerfully in me. I want you to know how I strive for you, for those of Laodicea, and for so many who have not met me personally.

I pray, that all may be encouraged. May you be established in love, that you may obtain all the riches of a full understanding, and know the mystery of God, Christ Himself. For, in Him, are hidden all the treasures of wisdom and knowledge.