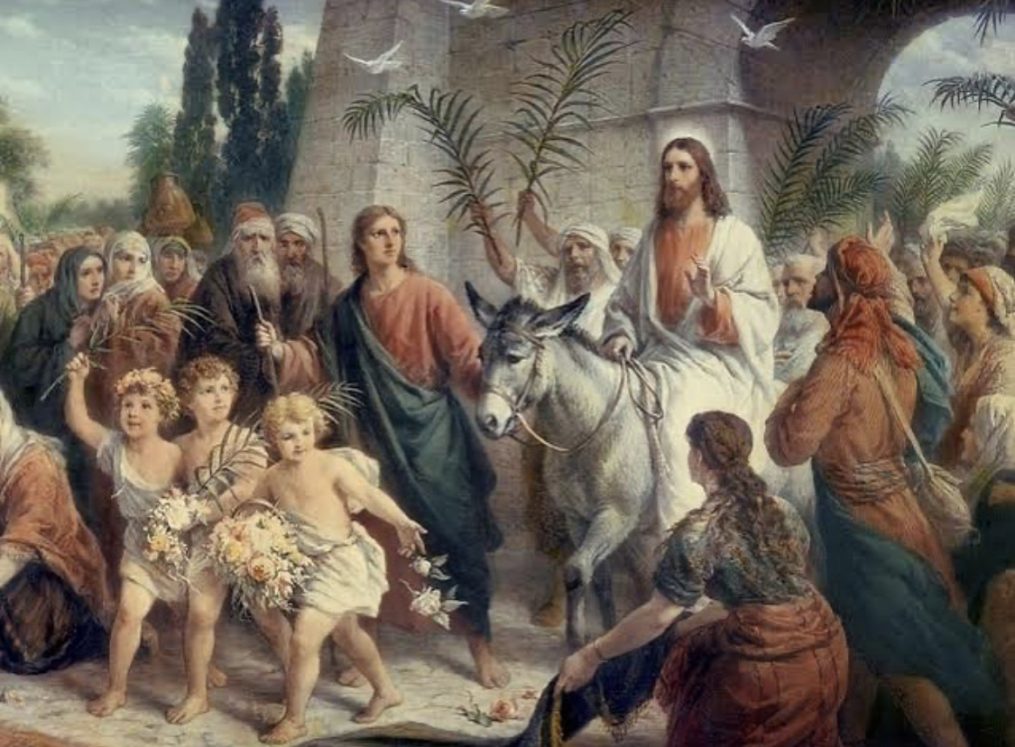 Dear brothers and sisters in Christ, on this Sunday, we listened to the Lord speaking to us about the matter of the Law of God being put inside our hearts and minds, that each and every one of us may know how to live our lives truly in accordance with what God has willed for us and with what He has taught us all to do. For God’s Law is not just a mere formality or law to be obeyed without understanding what the Law is all about, or else, our obedience will be without meaning and purpose.

In the first reading today, taken from the Book of Deuteronomy, we heard of the reminder from God to His people that He has given them His Law and His commandments, and He has revealed these to them so that they may come to be faithful and be obedient to the way which He has shown all of them. God showed them all how they could be righteous and upright in their words, actions and deeds.

Unfortunately, they frequently disobeyed Him and rebelled against Him, walked away from His path and turning away from His laws and commandments, preferring to follow their own volitions and obeying false gods and idols instead. And all these were because of their failure and refusal to listen to the will of God and to the Law of the Lord, which they thought as a restraint and oppressive regulations.

But they failed to understand what the Law truly means, as were their descendants, who preserved those very same laws and commandments, and failed to understand their meaning even until then. The Pharisees and the teachers of the Law preserved the Law and enforced strict obedience to them on the people. They enforced hundreds of rules and regulations, and were focused on the details of the Law, but failed to know why the Law was there in the first place.

And the Gospel passage which we have heard today put our understanding of the Law into a new understanding, as what the Lord Jesus spoke to His disciples using the famous parable of the Good Samaritan can tell us. We know this story of a good Samaritan man who helped a person robbed on his way to Jericho, while two other people, a priest and a Levite ignored him and just passed him by without helping him.

Now, we should understand deeper the symbolisms that exist in this parable, as the Lord wanted His disciples and all of us to know that it was not external piety and obedience to the Law that matter, but rather, our internal disposition, alignment, understanding and harmony with the Law that actually matter. The reality is that at that time, the society and the people of God were quite biased and had quite a bit of prejudice on the three people mentioned in the parable by Jesus.

The priest is usually a very respected person, as the priest symbolised the unity and link between God and man, as the one who is not just knowledgeable about the Law and God, but also as the one who offer the people’s sacrifices to God. Priests were also anointed by God to be His servants, and therefore, they were very essential in the livelihood of the people of God, and thus, commanded a large amount of respect.

Meanwhile, the Levite belonged to the tribe of Levi, from which priests were usually selected from. They were so important and honoured in their role, chosen by God, that they were traditionally not counted among the twelve tribes of Israel because they were supposed to be dwelling in all places, wherever there were need for priests. They were the descendants of Aaron and the priestly caste, and therefore also commanded a great deal of respect.

But the Samaritan was usually treated with disdain and prejudice, indifference and even hostility at times, just because they were seen as outsiders, pagans and people who were unworthy of God and His grace. The Samaritans were those who lived in the region of Samaria, the former site of the northern kingdom of Israel and were descended from a mixed heritage of some of the northern tribes of Israel and those pagan peoples that were brought into that place when the Israelites were exiled.

As such, the Jewish people in Judea and Galilee were often very wary, prejudiced and opposed against the Samaritans, whom they deemed to be pagans and unworthy. But yet, in what the Lord Jesus presented in the parable, it was exactly the same Samaritan who the people despised and often treated badly that was moved by the plight of a person who was robbed and left to die on the roadside.

And we should understand this with the fact that the Jews would not even touch or talk to a Samaritan, as evidenced in another part of the Gospels when the Samaritan woman of the Samaritan town of Sychar found the Lord Jesus strange for willingly talking to her, a Samaritan while He was a Jew. But that Good Samaritan not only showed pity on the injured Jew, but even took him to an inn and paid for his whole stay and mended his wound.

If we compare the behaviours and actions of the three people mentioned, the priest, the Levite and the Samaritan, it is quite obvious that the Samaritan did what the priest and the Levite did not do or refused to do. The greatest irony is that the two people who were commonly highly respected and praised for their obedience and observance of God’s laws did not do what the Lord has commanded them to do.

And on the contrary, the person everyone thought the least likely to be obedient to God, namely the Samaritan, had shown true faith and obedience to God’s commandments, by loving one of his own brethren, even though he was a Samaritan and the injured man was a Jew. That is the true essence of the Law and what God has wanted us all to do ourselves. The Law of God is about love, love that is pure and true, genuine and does not discriminate.

There is no point for us to be externally pious and appear to be good and law-abiding, if in our hearts we do not internalise and understand the meaning of those laws. That was what the priest and the Levite had done, which the Lord also used to subtly criticise the lives and the actions of the Pharisees and the teachers of the Law who have lived their lives in such a way, focusing on the external applications of the Law but not understanding why the Law was given to us.

Instead, all of us are called to love generously and be truly creatures of love, imitating the examples of none other than our beloved Father, Our Lord and God Who has loved us so generously and patiently, caring for the needs of all those who are dear to Him. God cares for each and every one of us without exception, and even we have sinned against Him and even after we have been obstinate in our rebelliousness, He continued to love us all regardless.

This is what the true essence of the Law of God is about, the love which God has for us, and which we therefore should also have for Him. And the love which we have, we should also love our fellow brethren, our brothers and sisters in our midst. Let us all be true disciples of the Lord from now on, and show love in our every words and actions from now on, so that we will be filled with true faith and love for God.

Let us all therefore not be hypocrites in our faith, but instead be sincere in our faith and in everything we do from now on. Let us all put the Law of God, the Law of His love in our hearts and minds, and make ourselves the instruments of His love. May God, our loving Father, be our guide and be our example, that each and every one of us may follow in our own lives, living our faith with dedication and conviction. Amen.

Jesus replied, “What a good answer! Do this and you shall live.” The man wanted to justify his question, so he asked, “Who is my neighbour?” Jesus then said, “There was a man going down from Jerusalem to Jericho, and he fell into the hands of robbers. They stripped him, beat him and went off, leaving him half-dead.”

“It happened that a priest was going along that road and saw the man, but passed by on the other side. Likewise a Levite saw the man, and passed by on the other side. But a Samaritan also was going that way; and when he came upon the man, he was moved with compassion. He went over to him, and cleaned his wounds with oil and wine, and wrapped them in bandages. Then he put him on his own mount, and brought him to an inn, where he took care of him.”

“The next day, he had to set off; but he gave two silver coins to the innkeeper, and said, ‘Take care of him, and whatever you spend on him, I will repay when I return.'” Jesus then asked, “Which of these three, do you think, made himself neighbour to the man who fell into the hands of robbers?”

The teacher of the Law answered, “The one who had mercy on him.” And Jesus said, “Then go and do the same.”

He is the image of the unseen God, and for all creation, He is the Firstborn, for, in Him, all things were created, in heaven and on earth, visible and invisible : thrones, rulers, authorities, powers… All was made through Him and for Him. He is before all and all things hold together, in Him.

And He is the Head of the Body, that is the Church, for He is the first, the first raised from the dead, that He may be the first in everything, for God was pleased to let fullness dwell in Him. Through Him, God willed to reconcile all things to Himself, and through Him, through His Blood shed on the cross, God established peace, on earth as in heaven.

But I pray to You, o YHVH. At a time most favourable to You, in Your great love, o God, answer me, with Your unfailing help. In Your mercy, o YHVH, give me a good answer; in Your great compassion, turn to me.

But I myself, am humbled and wounded; Your salvation, o God, will lift me up. I will praise the Name of God in song; I will glorify Him with thanksgiving.

Let the lowly witness this, and be glad. You who seek God, may your hearts be revived. For YHVH hears the needy; and does not despise those in captivity.

For God will save Zion and rebuild the cities of Judah. The children of His servants shall inherit it, and those who love His Name will dwell in it.

The fear of the Lord is pure, it endures forever; the judgments of the Lord are true, all of them just and right.

They are more precious than gold – pure gold of a jeweller; they are much sweeter than honey which drops from the honeycomb.

Neither are they at the other side of the sea for you to say : “Who will cross to the other side and bring them to us, that we may hear them and put them into practice.” On the contrary, My word is very near you; it is already in your mouth and in your heart, so that you can put it into practice.