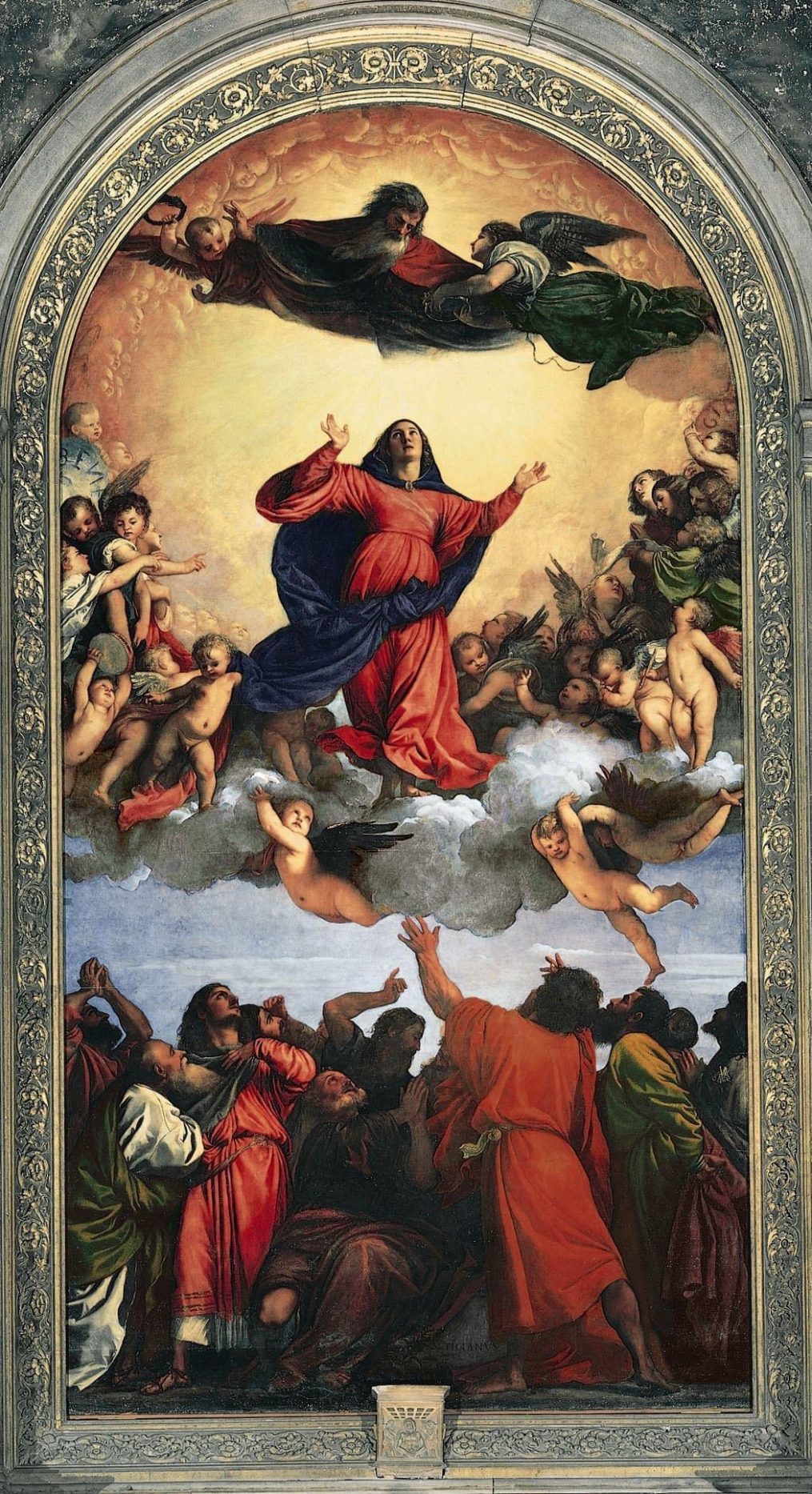 At that time, Mary stood weeping outside the tomb; and as she wept, she bent down to look inside. She saw two Angels in white, sitting where the Body of Jesus had been, one at the head, and the other at the feet. They said, “Woman, why are you weeping?”

She answered, “Because they have taken my Lord and I do not know where they have put Him.” As she said this, she turned around and saw Jesus standing there, but she did not recognise Him. Jesus said to her, “Woman, why are you weeping? Who are you looking for?”

She thought it was the gardener and answered Him, “Lord, if You have taken Him away, tell me where You have put Him, and I will go and remove Him.” Jesus said to her, “Mary!” She turned, and said to Him, “Rabboni!” – which means Master. Jesus said to her, “Do not touch Me, because I have not yet ascended to the Father. But go to My brothers and say to them : I am ascending to My Father, Who is your Father, to My God, Who is your God.”

So Mary of Magdala went and announced to the disciples, “I have seen the Lord, and this is what He said to me.”

For upright is the Lord’s word and worthy of trust is His work. The Lord loves justice and righteousness; the earth is full of His kindness.

In hope we wait for the Lord for He is our help and our shield. O Lord, let Your love rest upon us, even as our hope rests in You.

Peter said, “Let Israel then know for sure that God has made Lord and Christ this Jesus Whom you crucified.” When they heard this, they were deeply troubled. And they asked Peter and the other Apostles, “What shall we do, brothers?”

Peter answered : “Each of you must repent and be baptised in the Name of Jesus Christ, so that your sins may be forgiven. Then you will receive the gift of the Holy Spirit. For the promise of God was made to you and your children, and to all those from afar whom our God may call.”

With many other words Peter gave the message and appealed to them saying, “Save yourselves from this crooked generation.” So those who accepted his word were baptised; some three thousand persons were added to their numbers that day.

Dear brothers and sisters in Christ, today as we enter into the weekdays of Easter Octave, we listened to the words of the Lord speaking to us regarding the matter how the Apostles and the disciples were trying their best to proclaim the Lord and His truth, especially with regards to His glorious Resurrection among the people, beginning with the testimony made by St. Peter the Apostle before the whole assembly of the people, and then also what had happened at the Resurrection of the Lord as we heard it again in today’s Gospel passage.

In our first reading today we heard St. Peter speaking before the large number of people gathered at the moment after the Pentecost, when the Apostles received the Holy Spirit from God and began proclaiming courageously their faith in the Lord, and spoke openly regarding the Lord Jesus before all assembled, even when the chief priests and the Sanhedrin had been against such actions and works, and warned against all those who preached in the Name of the Lord. St. Peter spoke clearly and with conviction, calling on the people to follow the Lord.

St. Peter spoke to the people of how the recently crucified Man was indeed the Messiah or the Saviour of God, the One Who had been promised to all the people, and the One through Whom God’s salvation had come. And this was the truth that the chief priests and many among the members of the Sanhedrin or the Jewish High Council were trying to suppress and prevent from spreading. As we heard in the Gospel passage today, they tried to bribe the guards to tell the people how the disciples had plotted to steal the Body of Jesus and used that to claim how the Lord had risen from the dead.

That was truly a heinous attempt to stop the message of the Lord’s truth from being spread, to snuff out the Christian faith at its very infancy. However, the Lord guided those who were faithful to Him, giving them the courage and strength to speak up the truth even amidst the challenges and trials, the difficulties and threats that they were facing. They were guided by the Holy Spirit Who gave them the hope and the fire in their hearts to speak out what was in their hearts and minds.

Brothers and sisters in Christ, as we reflect on these readings, let us all consider carefully what it truly means for us to be Christians, to be those who believe in Christ, in His truth and Resurrection. As shown in those Scripture passages and as was evident throughout the long history of the Church, the faithful often had to contend against the popular opinion and also the general society, norms and rules, as persecutions of the faithful happened from time to time, again and again at different places and among different peoples.

Many of our brethren are still suffering from all sorts of persecutions and prejudices, bias and being ostracised, and yet, they held on to the faith firmly in the Lord despite the trials that they had to face. Then how about us, brothers and sisters in Christ? Have we allowed ourselves to be complacent in faith and take our Christian faith for granted? Let us remember the courage that was shown by the Apostles and the members of the early Church in standing up for their faith in Christ.

What are we going to do, brothers and sisters in Christ? We have all received the truth of God, and the Risen Lord had been revealed to us. Are we then going to be His witnesses in our world today? We do not have to do wonderful or amazing things in order to do so. Rather, we need to begin from the simple acts and our own daily living, each and every moments and interactions we have with our fellow brothers and sisters, with our neighbours and even with strangers we encounter.

How are we going to convince others if we ourselves have not led an exemplary Christian life, and commit ourselves thoroughly to a Christian way of living and also in the way we carry ourselves and act in this world? Let us not be like those hypocrites who pretended to believe and yet, in their hearts they did not truly love God at all. And let us all also not harden our hearts like those chief priests and the members of the Sanhedrin either.

Brothers and sisters in Christ, let us all live our lives from now on, as faithful Christians, as good role models of our faith, that we may truly be inspirations and beacons of light, of the light of Christ in the midst of all the darkness in this world. Let us all turn towards the Lord with renewed faith and dedication, with commitment and the courage to walk in the path that the Lord had set before us, following the examples of the Apostles.

May the Lord, our Risen Saviour and Master, be with us all, and may He bless us all and our good works and endeavours. May He continue to strengthen and encourage us all daily, as we continue to live our lives, hopefully ever more faithfully with each and every passing moments. Amen.