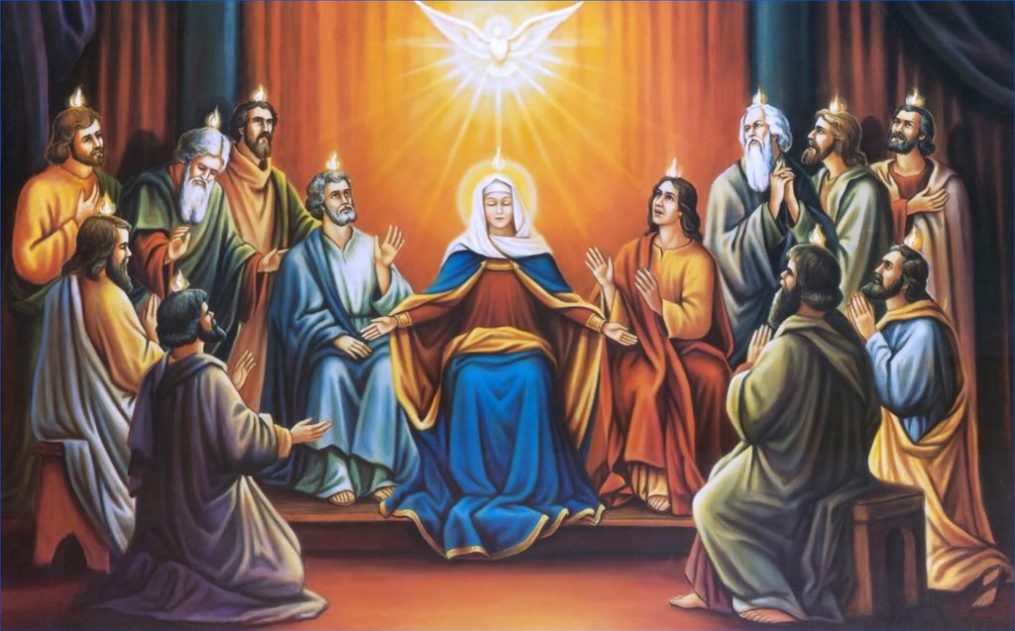 Dear brothers and sisters in Christ, on this Sunday, all of us are brought to attention to mankind’s frequent disobedience against God’s will and our stubbornness in refusing to listen to Him and to believe in Him wholeheartedly. From the Scripture passages we read, we listened again and again to our ancestors’ tendency to turn away from God and to abandon Him for other, more appealing things for them.

In the first reading today, taken from the Book of Joshua, the leader of Israel after Moses, it was told that many years after the Lord had led His people to settle in the Promised Land of Canaan, and after He had driven away the pagans who used to live in those lands. But, what likely happened was that, the people of Israel started to wander off from the path which God had set before them.

It was likely that they began to embrace the pagan idols and the pagan worship as practiced by their neighbours. It was also possible that some of the Israelites intermarried with the local Canaanites, who then persuaded them to worship the gods of their ancestors. At the time that this article was referring to, Joshua was already very old, and at the end of his earthly life.

He called the whole people of Israel to gather and place before them the choice, that is either to be with God and to be obedient to all of their commandments, or to walk away from Him to be with the pagan idols and rejecting all the promises and graces God has given them. And Joshua made it very clear also that being faithful to God requires a commitment, and he committed himself and his whole family to God. And the Israelites seemingly did the same as well.

Unfortunately, if we read on the next part of the Bible in the Book of Judges, it was apparent that the Israelites did not keep their words and neither did they keep their end of the agreement and commitment, as they fell into pagan worship and rejection of God’s laws and commandments. Generations after generations, God raised up Judges to help and guide His people to return to Him, but again and again they fell into temptation.

This happened throughout the time of the kingdoms of Israel and Judah as well. God sent His prophets to remind the people of their obligation to serve Him and to obey His laws and commandments, but many of them hardened their hearts and minds, refusing to believe in God and even persecuted the prophets and messengers sent into their midst.

Then in the second reading today, we heard St. Paul speaking to the Church and the faithful in the city of Ephesus through his Epistle to them. He spoke regarding the matter of husband and wife who have been united through the sacred bond of matrimony, and how it is important that both parties devote themselves towards each other. He mentioned that wives ought to be obedient and loving towards their husband, while the husbands ought to show care and love for their wives.

And in that same Epistle, St. Paul was making a lot of connections between the relationship of husbands and wives, and the relationship that Christ has with His Church. This is a reminder that in our marriage and in our families, there is a need for commitment and dedication by either side of the party. Marriage and family are not just something that we can take lightly.

Unfortunately, as shown throughout the Old and New Testament, as well as throughout the history of mankind and even among us Christians, there were indeed many obstacles to the building of good familial relationships and matrimonial unions. There were many obstacles and challenges facing those who build up families, that caused break-ups and destruction of those families, with many children entangled in the midst of those unfortunate tragedies.

And many of us are tempted by our eyes and by our flesh’s desires for sexual impropriety and immoral acts, especially in our ever increasingly hostile environment, where love and relationships become more and more commercialised, trivialised and all sorts of immoral and inappropriate relationships are promoted by the world around us. Many among us fell into these traps laid down in our path by the devil.

And lastly, the Gospel passage today showed us just how the Lord’s truth fell on deaf ears and stubborn hearts. When He told them that He is the Bread of Life Who came down from heaven, and that all those who eat of His Body and drink His Blood will have eternal life, many among the people who followed Jesus left Him, because they could not find in themselves the courage, the faith and the open-mindedness to accept the truth of God.

They could not accept the truth because they were still thinking mostly in worldly terms, and think that they knew it better than the truth presented by the Lord. They left Him behind because they could not dedicate themselves with the faith and commitment required of them. Even the Apostles and some of the disciples were also taken aback by what the Lord presented before them, but they remained faithful to Him and continued to follow Him, putting their trust in Him.

Brothers and sisters, all of these ought to remind us that as Christians, each and every one of us will inevitably face challenges, difficulties, oppositions and even persecutions from those who we encounter in life. And it is in fact often that those who are closest to us, will also cause us trouble and to be divided in ourselves. I am sure many of us have experienced before, the feeling of being torn between our obedience to God and our desire to be accepted by others, by our community and by the world.

This is where we need to stand up for our faith, although indeed as Christians evidently we also need to approach the issue with charity and grace. We cannot be easily swayed by the demands and the desires of the world, that we end up having no anchor of faith in God, or ending up being swallowed by those desires and by our ego and greed. This is what Satan intended to do with us, brothers and sisters! He wants to drag us down with him into eternal damnation.

The best way to confront this issue, is of course not through open confrontation or conflict. Rather, we should focus ourselves on God and reorientate ourselves to live our lives in accordance with His laws and commandments. We should strive to be righteous and just in each and every one of our actions, and to be exemplary in faith. Through all of these, we will draw closer to God and be beacons of faith for others to follow.

Let us therefore, brothers and sisters in Christ, be examples and guides for one another, that each and every one of us may be able to find our way to God and to His saving grace. Let us all seek Him with all of our hearts and with all of our strength, and resist all the temptations that threaten to prevent us from finding our way to God. Let us therefore pray, that God will continue to strengthen us in faith, and to persevere in the midst of those challenges.

Should we falter and fall, let us take it as an opportunity for us to rebound back, and to repent wholeheartedly from our shortcomings and mistakes, turning back to God with a contrite and loving heart, rather than doubling down our sins. May the Lord be our strength and be our inspiration, that in each and every challenges we face in life, in each and every opposition we may encounter, we will always find joy knowing that despite what we may suffer from, we always walk in God’s presence and faithfully in His ways. Amen.

At that time, after the Jews heard Jesus, many of His followers said, “This language is very hard! Who can accept it?”

Jesus was aware that His disciples were murmuring about this, and so He said to them, “Does this offend you? Then how will you react when you see the Son of Man ascending to where He was before? It is the Spirit that gives life, not the flesh. The words that I have spoken to you are Spirit and they are life. But among you there are some who do not believe.”

From the beginning, Jesus knew who would betray Him. So He added, “As I have told you, no one can come to Me unless it is granted by the Father.” After this many disciples withdrew and no longer followed Him. Jesus asked the Twelve, “Will you also go away?

Peter answered Him, “Lord, to whom shall we go? You have the words of eternal life. We now believe and know that You are the Holy One of God.”

Scripture says : Because of this a man shall leave his father and mother to be united with his wife, and the two shall become one flesh. This is a very great mystery, and I refer to Christ and the Church.

I will praise YHVH all my days; His praise will be ever on my lips. My soul makes its boast in the Lord; let the lowly hear and rejoice.

The eyes of YHVH are fixed on the righteous; His ears are inclined to their cries. But His face is set against the wicked, to destroy their memory from the earth.

YHVH hears the cry of the righteous and rescues them from all their troubles. YHVH is close to the brokenhearted and saves the distraught.

Many are the troubles of the just, but YHVH delivers them from all. He keeps all their bones intact, and none of them will be broken.

Evil will slay the wicked; the enemies of the just will be doomed. But YHVH will redeem the life of His servants; none of those who trust in Him will be doomed.